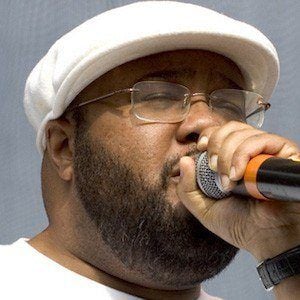 One half of the California-born hip hop duo Blackalicious. The duo released almost half a dozen albums and he released several of his own solo albums. He and producer Chief Xcel became known best for their tongue-twisting lyrics and classic beats.

He met his Blackalicious partner Chief Xcel while the two were attending high school in Sacramento, California. At the time, he'd been known by the stage name Gabby T. The two parted ways after high school but came together again in 1992 to form Blackalicious.

Outside Blackalicious, he was also known as a member of the hip hop collectives Quannum MCs and The Mighty Underdogs.

His real name was Timothy Parker.

Gift of Gab Is A Member Of