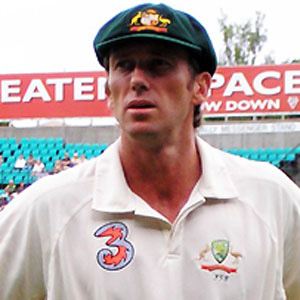 Australian fast bowler considered to be one of the greatest to ever play the game. He took 563 Test wickets over a 14-year career, setting a world record for a fast bowler. He also took a record-71 wickets over four Cricket World Cups. He became a commentator following his retirement.

He first played cricket as a teen, and after Doug Walters spotted him and saw his potential, it was decided that he should move to Sydney to train professionally.

He was among the 21 athletes to make the Australian Institute of Sport Best of the Best list in 2001. He joined the ICC Cricket Hall of Fame in 2013.

He had two children with his wife Jane Louise.

He retired with the third-most Test wickets of all time, trailing only off-spinner Muttiah Muralitharan and leg-spinner Shane Warne. Shortly after retiring, McGrath was also surpassed by leg-spinner Anil Kumble.

Glenn McGrath Is A Member Of