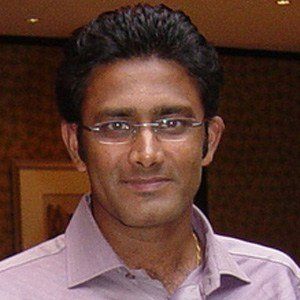 Cricketer of the Year in 1993, he became the third bowler to take 600 Test wickets in a career and the first Indian to do so. In 1999, he took all 10 wickets in an innings against Pakistan, joining Jim Laker as the only players to accomplish the feat.

He fell in love with cricket as a young man in Bangalore and made his Test debut at age 19.

He was appointed the Chairman of the International Cricket Council after his retirement in 2012.

He married Chethana Ramatheertha in 1999. He has a son named Mayas and a daughter named Svasti.

He took a total of 619 Test wickets in his career, retiring with the third-most all time behind only Shane Warne and Muttiah Muralitharan.

Anil Kumble Is A Member Of