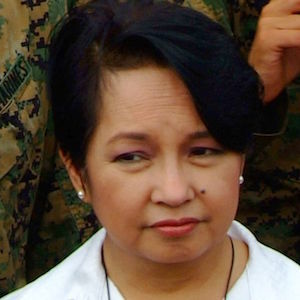 Filipino politician who served as the 14th President of the Philippines from 2001 to 2010.

When she was just 14 years old, her father, Diosdado Macapagal, was elected as president.

She was arrested for electoral fraud in 2011 and then again in 2012 for the misuse of state lottery funds.

She has three children with her husband Jose Miguel Arroyo, who she married in 1968. Their names are Juan, Evangelina, and Diosdado.

She studied for two years at Georgetown University's Walsh School of Foreign Service in Washington, D.C. where she was a classmate of future President Bill Clinton.

Gloria Macapagal Arroyo Is A Member Of