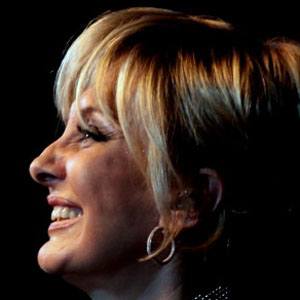 Iranian pop singer and actress who became known in the 60s and 70s for her eclectic music and award-winning performances in films like 1973's "Bita." She was considered a renegade for her flamboyant fashion sense in a strict Iranian culture.

Her father discovered her talent for doing impressions of popular singers and made her begin performing professionally at just three years old.

She and other female artists were banned from performing following the 1979 Iranian Revolution. Still, her following grew, and she made a triumphant comeback in 2000.

Her real name is Faegheh Atashin. She had a brother who died of rheumatic heart disease at age twenty-four. She has one son, Kambiz.

She was married to actor Behrouz Vossoughi for fourteen months, from 1975 to 1976.

Googoosh Is A Member Of