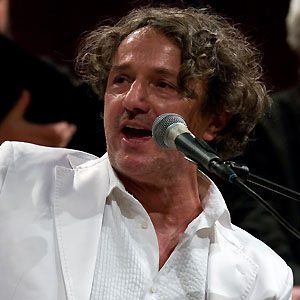 Internationally celebrated composer and musician who was the creative force behind rock band Bijelo Dugme. His first film score was for "Butterfly Cloud" from 1977.

He fled Bosnia and Herzegovina before the outbreak of the Bosnian War. He was noticed at a Beštije gig after a series of missteps and bad luck. He was invited to play bass in the band Kodeksi.

He became very involved with writing film music, including "Time of the Gypsies" from 1988 and "Arizona Dream" from 1993.

He was married to Dženana Sudžuka in 1993 and raised three children with her. He also had another daughter from an earlier relationship.

He collaborated with many other artists, including Cesária Évora and Iggy Pop.

Goran Bregovic Is A Member Of