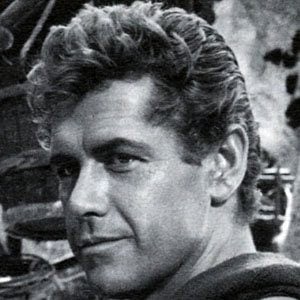 Best remembered for his starring role in the Tarzan films of the 1950s and early 1960s, this actor played several other swashbuckling hero roles, including Remus in Duel of the Titans and Hercules in Hercules and the Princess of Troy.

He served in the United States Army from 1944 until 1947 and subsequently worked as a lifeguard in Las Vegas. While on duty at the Sahara Hotel and Casino, he was approached by a talent scout who secured him the role of Tarzan.

After ending his Tarzan contract, he relocated to Europe and appeared in a series of Italian films.

Born Gordon Merrill Werschkul, he grew up in Portland, Oregon, with eight siblings. He was married to Janice Wynkoop and actress . He had a child with each of his wives.

He took over from the previous Tarzan actor, Lex Barker, in the eighteenth installment (Tarzan's Hidden Jungle) of the Tarzan films.

Gordon Scott Is A Member Of