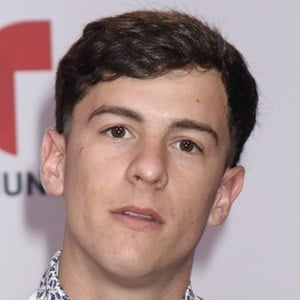 Puerto Rican recording artist who rose to fame with his 2019 viral song "ReBoTa." In June of that same year, he signed with Universal Music Latino and Republic Records. His most well known collaborations include "Taxi" with Mariah and "Se Te Nota" with Lele Pons.

He studied chemical engineering in college.

His stage name stems from the word "guaynabito," which is Puerto Rican slang for an upper middle class person from the Guaynabo municipality. He was nominated for Best Reggaeton Performance for his song "Chicharrón" featuring Cauty at the Latin Grammys 2020.

His real name is Jean Carlos Santiago Pérez. He lived between Caguas and Carolina, Puerto Rico during his childhood. He has a brother and a sister. His father and grandfather were musicians. He dated Jacky Fontánez in 2019. In late 2020, he began dating Lele Pons. The couple shared their engagement in August 2022.

In 2019, he released a remix of his hit song "Rebota" featuring Nicky Jam, Farruko, Becky G and Sech.

Guaynaa Is A Member Of