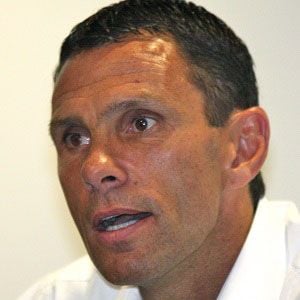 Uruguayan striker who won the FA Cup and the UEFA Winners' Cup with Chelsea. He played for Real Zaragoza from 1990 to 1997 and spent the last three seasons of his career with Tottenham Hotspur.

He started out his career with the Grenoble club in French association football and the River Plate club in his home country.

He missed most of his first season with Chelsea because of an injury, but he came back just in time to help the team win in the UEFA Cup Winners' Cup Final.

He grew up in Montevideo, Uruguay.

His four-year tenure with Chelsea ended just as Frank Lampard joined the team for the first time in 2001.

Gus Poyet Is A Member Of