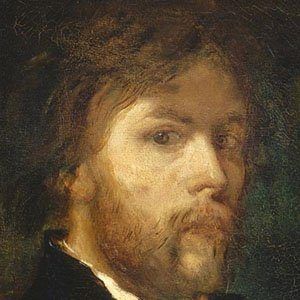 Symbolist painter best known for 'Oedipus and the Sphinx' and other works featuring mythological and biblical images. He taught such future notables as Henri Matisse and Georges Rouault while a professor at École des Beaux-Arts in Paris.

He was originally trained by François-Édouard Picot and Théodore Chassériau. His earliest painting was "Pietà" and it was acquired by the Angoulême cathedral.

He produced more than 8,000 works of art during his lifetime; many of his paintings can be found in Paris' Musée National Gustave Moreau.

He was the son of a Parisian architect named Louis Jean Marie Moreau. He had a relationship with his longtime portrait model Adelaide-Alexandrine Dureux.

He was influenced by Edgar Degas.

Gustave Moreau Is A Member Of