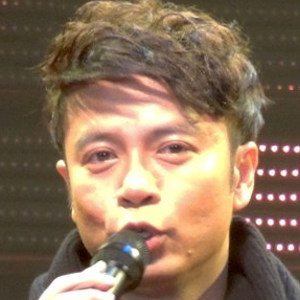 Vocal artist who is known for his work in the sports broadcasting, pop singing, acting, and TV hosting industries in Hong Kong. He is one of a select few Hong Kong-based singers to have received awards across four decades, from the 1980s to the 2010s.

He studied at the Wah Yan College in Hong Kong. He subsequently won the 1985 Hong Kong 18 District Singing Competition, and was rewarded a recording contract with PolyGram Records.

He has had a litany of his songs top the TVB music charts in Hong Kong. In 2013, he won his fifth RTHK Top Ten Chinese Gold Songs Award for Outstanding Male Singer.

He was born and raised in Hong Kong.

He participated in his first ever talent competition on TVB while still a student at Wah Yan College alongside Vivian Chow.

Hacken Lee Is A Member Of