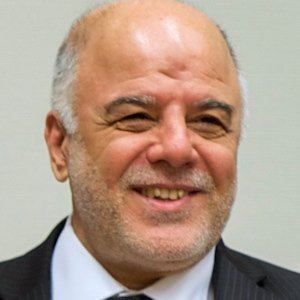 75th Prime Minister of Iraq, member of the Islamic Dawa Party,and former Minister of Communications from 2003 to 2004 during the first government after the United States' invasion of Iraq and the reign of Saddam Hussein.

He studied electrical engineering in Baghdad and later received a PhD in the same subject from the University of Manchester, England. He joined the Islamic Dawa Party in 1967 and became party leader in 1977 while studying in England.

In August 2015, he proposed extensive overhauls to the Iraqi government, which has been wrought with corruption since its instatement after the US invasion in 2003. The overhaul included strict rules on corruption and extensive plans on how to deal with the Islamic State terrorists that is threatening the region. All of this came in response to major civilian protests in the heart of Baghdad.

He is of Shia Islamic religion and grew up with three brothers. He has three children.

During the international community's struggle with the threat of the Islamic State terrorists, he has criticized US president Barack Obama's methods and edged closer to lining up with the views of Iran and Russian president Vladimir Putin.

Haider Al-Abadi Is A Member Of