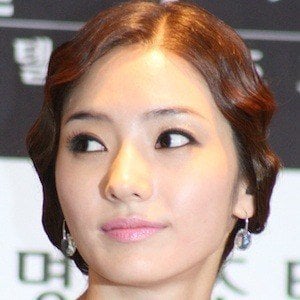 Perhaps most well known for her KBS Drama Award-nominated title role in the South Korean television series Sassy Girl Chun-hyang. Han is also notable for her work in the SBS series My Girl and in the KBS series Sister's Slam Dunk. Her film credits include roles in Girlfriends (as Jin) and Wild Card (as Kang Na-na).

She made her screen acting debut in the Korean horror film Record (2000). Around this time, she earned a degree in theatre and film from Dongguk University.

She received a Cosmopolitan Beauty Award for "Most Stylish Actress of 2011."

Born Kim Ji-young, she spent her earliest days in South Korea but grew up primarily in Chicago, Illinois. She married business executive Choi Dong-joon in 2007. They welcomed a son in late 2013.

She co-starred with Lee Chun-hee in the 2005 television series Only You.

Han Chae-young Is A Member Of