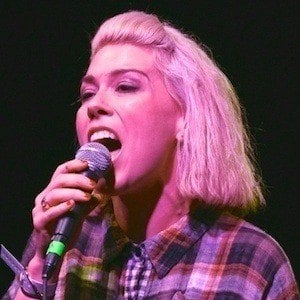 Vocalist and keyboardist for indie rock and pop outfit Grouplove that formed in 2009. The band's first three album all charted on the Billboard 200, with their second release Spreading Rumours peaking within the top 20.

Her band was formed by herself and vocalist/guitarist Christian Zucconi who met on the Lower East Side of Manhattan. Hooper heard Zucconi's former band ALOKE and enjoyed the music.

She was a voice actress for an episode of BoJack Horseman called "Hank After Dark." Her band has music featured on soundtracks of Paper Towns, Blended, Project Almanac and other films.

She has a child named Willa.

Hannah Hooper Is A Member Of