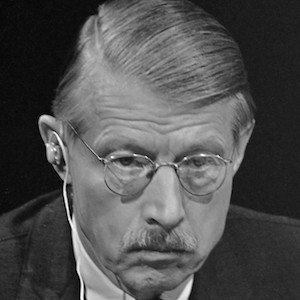 Pulitzer Prize-winning reporter for the New York Times who was also the author of over two dozen books on the communist world.

He spent 20 years working the foreign bureaus of United Press and served as the Moscow bureau chief of the New York Times from 1949 to 1954.

Despite criticism from Senator Joseph McCarthy and his supporters that his stories were too sympathetic toward the Russians, he still won the Pulitzer in 1955.

He grew up in Minneapolis, Minnesota as the son of Percy Pritchard Salisbury and Georgiana Evans Salisbury.

His sympathetic portrayals of Martin Luther King and the civil rights struggle in the deep south prompted a $6 million libel lawsuit against the New York Times, which was found in favor of the newspaper.

Harrison Salisbury Is A Member Of