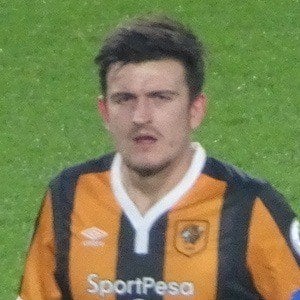 Soccer player who has been a standout defender for squads like Sheffield United FC, Hull City AFC and Leicester City FC. He was voted Sheffield United Player of the Year in 2012, 2013 and 2014. He debuted with the English national team in 2017.

He came up through Sheffield's youth system before making his senior debut in 2011.

His brothers Joe and Laurence are also soccer players. He's engaged to Fern Hawkins, whom he's dated since 2011. They welcomed a daughter named Lillie together in April 2019. Maguire and Hawkins had their second daughter, Piper Rose, on 9 May 2020.

He has been teammates with goalkeeper Kasper Schmeichel at Leicester City.

Harry Maguire Is A Member Of