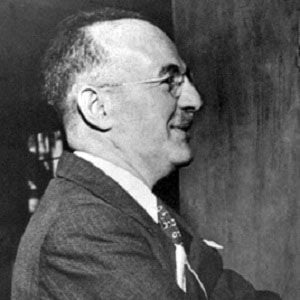 Notable for his high-ranking position with the United States Treasury Department, this American economist is remembered for his post-World War II financial policy initiatives (including the creation of the World Bank and the International Monetary Fund) and is equally infamous for sharing American financial secrets with the Soviet Union.

After being stationed in Europe during World War I as a lieutenant in the United States Army, he returned to his native country and earned a bachelor's degree in economics from Stanford University, followed by a doctorate from Harvard.

His espionage activities were confirmed by the United States' Venona intelligence project.

The children of Jewish parents from Lithuania, he and his six older siblings grew up in Boston, Massachusetts. His marriage to Anne Terry White resulted in daughters named Joan and Ruth.

As the chief American representative at the Bretton Woods Conference of 1944, White overcame the objections of the prominent British economist John Maynard Keynes and reorganized post-war financial policy in a manner that fell in line with his own vision.

Harry Dexter White Is A Member Of