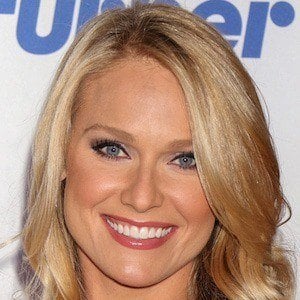 Sports broadcaster known for her with the MLB Network, where she took over as the weeknight host of Quick Pitch in 2013. She'd previously covered the Boston Red Sox for the New England Sports Network and spent time with Time Warner Cable SportsNet LA.

She was a track & field competitor in high school as well as a National Merit Scholar. She studied at the University of San Diego.

She came in second place in the 2002 Miss California pageant. She was also in the 2011 music video for the Dropkick Murphys' "Going Out of Style" and has more than 60,000 followers on Instagram.

She was born to Lon and Mary Watney and has four siblings. She married Mike Wickham on New Year's Eve 2014.

She and Sam Ryan have both hosted Quick Pitch, with Ryan taking over on weekends.

Heidi Watney Is A Member Of