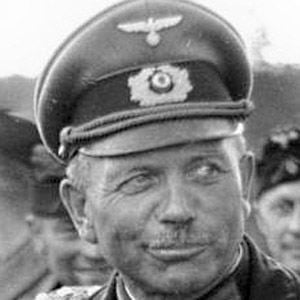 Remembered as a proponent of tank warfare, this general in the German Wehrmacht frequently came into conflict with Adolf Hitler over Hitler's management of the Nazi military forces. Over the course of his military career, he received the Knight's Cross of the Iron Cross, an Anschluss Medal, and a Sudetenland Medal.

In 1908, after attending a military training school in Metz, France, he earned the rank of lieutenant.

He outlined his vision for armored warfare in a book titled Achtung - Panzer!

Born to Friedrich Guderia and Clara Kirchoff, he grew up in an area of West Prussia that is a part of modern-day Poland. His son, Heinz Günther Guderian, also joined the military.

German military leader Erwin Rommel lauded Guderian for the important role he played in the development of methods of armored warfare.

Heinz Guderian Is A Member Of