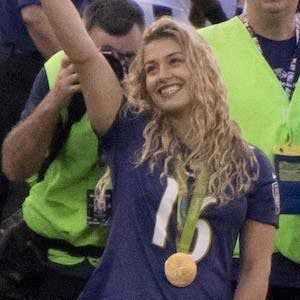 Greek-American freestyle wrestler who is known for her competitions representing the United States who competes in the women's 55-kg and 53-kg categories. she is an olympic athlete.

With wrestling experience in high school, she later attended the Missouri Baptist University where she competed on the women's wrestling team in Saint Louis, Missouri, before ultimately transferring to compete for Simon Fraser University in Burnaby, British Columbia, Canada. She later on dedicated her time to training at the U.S. Olympic Education Center at Northern Michigan University.

She won a gold medal at the 2015 World Wrestling Championships in Las Vegas, Nevada. At the Summer Olympics in Rio de Janeiro in 2016, she became the first ever American to win a gold medal in women's freestyle wrestling at the Olympic Games.

She is the daughter of the Paula and Yiannis Maroulis. Her grandparents emigrated to the United States from the Greek island Kalamos in the 1960s. She was born and raised in Rockville, Maryland.

She defeated Saori Yoshida 4-1 in order to win the gold medal at the 2016 Olympic games.

Helen Maroulis Is A Member Of