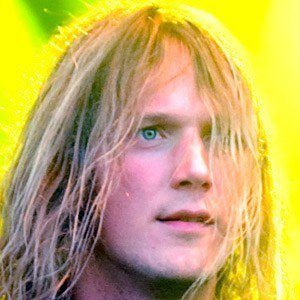 Best known for his work as a bass player and backing vocalist for the Finnish power and melodic death metal band Children of Bodom, this musician performed on custom ESP Guitar-brand four and five-string basses.

He started playing the guitar when he was eleven years old and the drums when he was thirteen. During his early teens, he was the drummer for a band called Aivokasvain (English translation: Brain Tumor).

He took classes in politics at the University of Helsinki and learned to speak English, Russian, and Swedish, as well as Finnish (and small amounts of Spanish and French).

He and keyboardist Janne Wirman both performed with Children of Bodom.

Henkka Seppala Is A Member Of