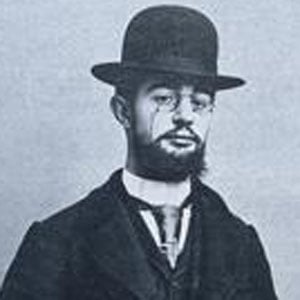 Remembered for such Post-Impressionist paintings as "A Box at the Theater" (1896) and "The Laundress" (1889), this nineteenth-century French painter is equally famous for his colorful posters depicting cabaret scenes from Paris' Moulin Rouge.

From his early childhood years, he suffered from health problems that disrupted his growth and left him permanently physically disabled and much shorter in stature than the average man.

Over the course of his career, he created more than 6,000 works of art, including watercolors, posters, drawings, prints, and ceramics. In 2005, his painting La Blanchisseuse (The Laundress) sold for over twenty-two million United States dollars.

He was born in Albi, France and raised primarily in Paris as the child of aristocrats Adele Tapie de Celeyran and Comte Alphonse de Toulouse-Lautrec-Monfa. When he was four years old, he dealt with both the death of his younger brother and his parents' subsequent separation.

He was a close friend of the famous Irish author Oscar Wilde.

Henri De Toulouse-Lautrec Is A Member Of