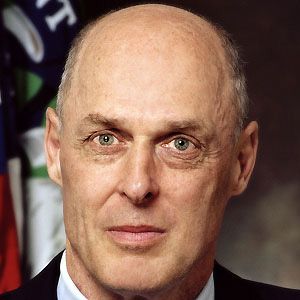 United States Secretary of the Treasury from 2006 to 2009 whose policies in-part caused the 2008 economic crash. He was named by Time Magazine as one of the "25 People to Blame for the Financial Crisis". A documentary about him entitled "Hank: Five Years From the Brink" was released on Netflix in 2013.

He was an offensive lineman of the Dartmouth football team before receiving his Master of Business Administration degree from Harvard Business School in 1970.

He was the CEO of Goldman Sachs from 1999 to 2006 and before becoming Treasury Secretary, he was required to liquidate all of his stock holdings in Goldman Sachs, which were valued at over $600 million.

He has two children with his wife Wendy.

He was portrayed as William Hurt in the HBO film Too Big to Fail.

Henry Paulson Is A Member Of