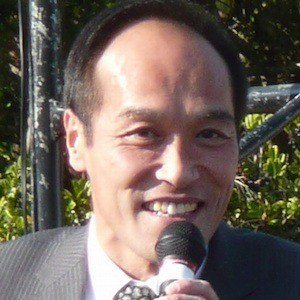 Japanese comedian and politician who hosted the game show, Takeshi's Castle. He was also the Governor of Miyazaki Prefecture from 2007 to 2011.

He graduated from Senshu University in 1980 and in 2000, he attended Waseda University where he studied the arts and local autonomy.

After his time in office, he ran again in 2011 in the Tokyo gubernatorial election, but lost to ShintarÅ Ishihara.

He is a fellow Japanese comedian to Enomoto Kenichi.

Higashi Sonomanma Is A Member Of