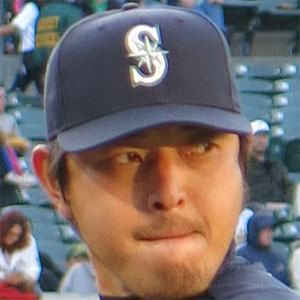 Japanese pitcher who was a star in the Nippon Baseball League before joining the Seattle Mariners in Major League Baseball in 2012. Prior to the 2016 MLB season, he signed with the Los Angeles Dodgers.

He attended Horikoshi High School and was selected in the fifth round of the NPB Amateur Draft.

2008 was a banner year for him, winning the Pacific League MVP award and the Eiji Sawamura Award as the best starting pitcher in NPB. In 2009, he won the World Baseball Classic with Japan.

He has children named Towa and Uta.

He and Mariners teammate Felix Hernandez were both All-Stars in 2013.

Hisashi Iwakuma Is A Member Of