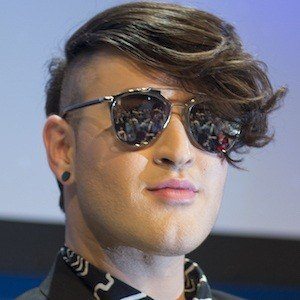 Israeli pop star known for representing his country at the 2016 Eurovision Song Contest, where he finished 14th after singing "Made of Stars." He was also a contestant on season seven of A Star is Born.

Although he started pursuing music as a young teen, his career only began in earnest after completing his compulsory military service. He released his first single in 2009.

He's provided Hebrew dubs for movies and has worked as a hairstylist and makeup artist. He has more than 10,000 followers on Instagram.

His real name is Hovav Sekulets. He is openly gay. His stepfather, John McIntyre, was a professional basketball player.

Jamala of Ukraine was the winner of the 2016 Eurovision Song Contest.

Hovi Star Is A Member Of