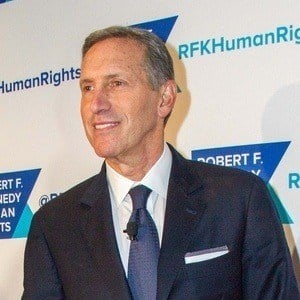 Businessman who became founder, chairman, and CEO of Starbucks. He also owned the NBA's Seattle SuperSonics from 2002 to 2006.

He got his start selling coffee drip machines and noticed a Seattle coffee place called Starbucks was buying many of them.

He was named 2011 Businessperson of the Year by Fortune Magazine.

He had a son and a daughter with his wife, interior designer Sheri Kersch Schultz.

He had an ongoing feud with SuperSonics point guard Gary Payton while he was owner of the team. Payton was ultimately traded to the Milwaukee Bucks in exchange for shooting guard Ray Allen.

Howard Schultz Is A Member Of