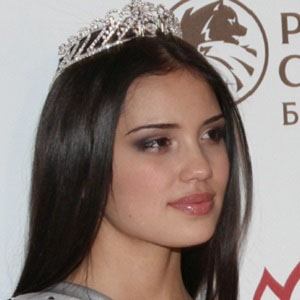 Russian model who was crowned Miss Tatarstan 2010 and finished as the first runner-up in Miss Russia 2010. She has since walked the runway for some of the world's top fashion designers, including Marc Jacobs and Ralph Lauren, and participated in shows like the Victoria's Secret Fashion Show.

She grew up in Bukhara, Uzbekistan until the age of seven, when she moved in with her grandmother in Tatarstan. She has studied Fashion Design at Kazan State Technical University.

In 2013, she landed on the cover of Marie Claire, her first magazine cover.

Her mother was also a beauty queen who was crowned Miss Bukhara in 1989. She never met her father.

She and Alena Shishkova have both been runners-up in the Miss Russia pageant.

Irina Sharipova Is A Member Of