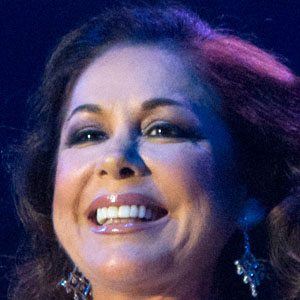 Beloved Spanish singer who has released over a dozen albums during her illustrious career. Her 1988 album "Desde Andalucia" won the Lo Nuestro Award for Pop Album of the Year. In 2019 she competed in Telecinco's reality TV show Supervivientes.

She was raised in a show business family, as her father and grandfather were professional singers.

She was sentenced to twenty-four months in prison for acting as an accomplice to her money-laundering boyfriend but was excused from having to do so after paying four million euros.

Her late husband, famed bullfighter Francisco Rivera Perez, was killed by a bull in September 1984. She has two children, Kiko and Chabelita.

She and pop star Marta Sanchez Lopez are two of Spain's most well-known female singers.

Isabel Pantoja Is A Member Of