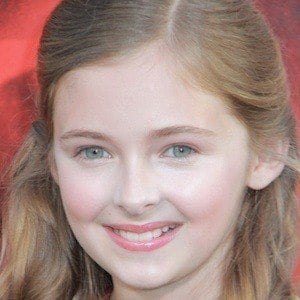 In 2014, this young actress appeared as Sarah Compton in several episodes of the HBO series True Blood and also had guest spots on ABC Family's Pretty Little Liars and CBS's Two and a Half Men.

She made her television debut in a 2013 episode of the popular musical television series Glee.

She was cast as Young Jerrica Benton in the 2015 fantasy movie Jem and the Holograms.

She grew up with siblings named Liam and Olivia.

She appeared alongside former child star Anna Paquin in three True Blood episodes: "Lost Cause," "Fire in the Hole," and "Jesus Gonna Be Here."

Isabella Kai Rice Is A Member Of