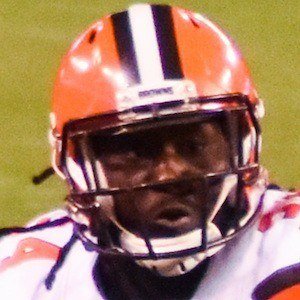 American football running back who signed with the Cleveland Browns after going undrafted in 2014. He led the team with eight rushing touchdowns as a rookie, splitting carries with Terrance West.

Following a breakout freshman season at the University of Georgia, which earned him freshman of the year honors from the AP, he was kicked off the team due to a felony weapons charge. He finished his college football career at Alabama State University.

He averaged more than eleven yards per carry (4,872 yards on 429 carries) over the course of his high school career and was also a varsity sprinter.

He was born to Andrea and Debbie Crowell.

He was teammates with Brian Hoyer in 2014.

Isaiah Crowell Is A Member Of