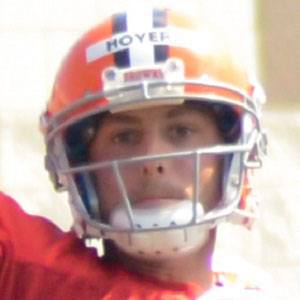 NFL quarterback who debuted in 2009 for the New England Patriots, then joined the Cleveland Browns in 2013 after short stints with the Steelers and Cardinals.

He was All-Big Ten honorable mention in 2007 while at Michigan State.

He was named Cleveland's starting quarterback in week 3 of the 2013 season and after two solid games, he tore his MCL and missed the rest of the season.

He married his high school girlfriend, Lauren, and they have a son together.

When he first entered the league he was a backup to Tom Brady.

Brian Hoyer Is A Member Of