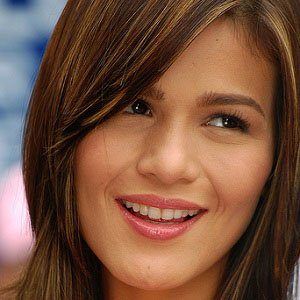 Known for her roles in such ABS-CBN series as Kahit Puso'y Masugatan and TodaMax, this Filipina television actress also appeared in a number of GMA network series, including Encantadia and the soap opera Te Amo, Maging Sino Ka Man.

Before beginning her acting career, she studied at the University of Santo Tomas and subsequently worked as a voice actress, dubbing Mexican telenovelas for Philippine audiences.

She was the 2009 host of the Binibining Pilipinas beauty pageant.

She was born in Quezon City, Philippines to Mary Ann Ussher and director and choreographer Lito Calzado. Her brother, Dash Calzado, became known for his membership in a rap music group called Legit Misfitz.

She co-starred with Dingdong Dantes in the 2006 Filipino movie Moments of Love.

Iza Calzado Is A Member Of