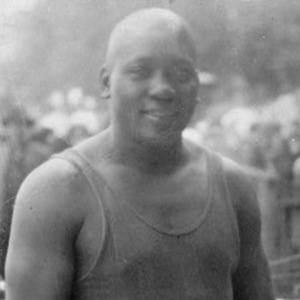 Revered boxer nicknamed "The Galveston Giant" famous for becoming the first African-American World Heavyweight Boxing Champion in history. His 1913 conviction for allegedly violating the "Mann Act" was met with much controversy, making him a lightning rod for racially-charged discourse in America.

He was born in Gavelston, Texas and worked as a janitor and horse exerciser before making his professional boxing debut in November 1898.

In 1910, he defeated the previously undefeated Heavyweight Champion James J. Jeffries in a fight that has become popularly known as "The Fight of the Century."

His three marriages, each to a white woman, were highly controversial at the time.

A documentary about his life by renowned documentarian Ken Burns, titled "Unforgivable Blackness: The Rise and Fall of Jack Johnson," was released in 2004.