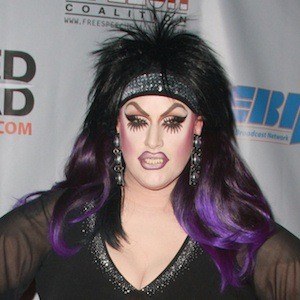 The stage persona of actor, singer, and songwriter Kent Fuher. She has appeared in a variety of films and shows including Wigstock: The Movie, Adam & Steve, and Sex and the City.

She has been performing in a variety of cabaret shows and comedy shows all across Europe and the U.S. With multiple performances at festivals and other events, she gained more popularity and appeared in several films and TV shows.

She is known for impersonating and channeling Bea Arthur in the stage version of The Golden Girlz and as part of The MisMatch Game at the LA Gay & Lesbian Center to Benefit homeless LGBT youth.

She was born in West Covina, California and eventually settled in Highland Park, California.

During her performances, she covers a variety of songs from celebrities including Mary J. Blige, Christina Aguilera, Cher, and Lady Gaga.

Jackie Beat Is A Member Of