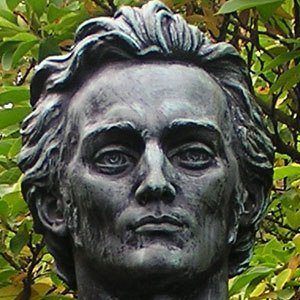 Irish poet whose well-known poems include "The Funerals," "Siberia," and "To the Ruins of Donegal Castle." In late works such as "My Dark Rosaleen," he explored political themes.

He studied Romance languages at a Dublin Jesuit school. He published his first poem in 1818 and began publishing other early works in a journal called the Dublin University Magazine.

He was eccentric and psychologically troubled. In addition, he suffered from alcoholism and opium addiction, both of which hastened his early death from cholera.

He was the son of a bankrupt grocer and, at a young age, had to go to work as a law clerk to help support his family.

His life and works were discussed in an important essay written by Dubliners author James Joyce.

James Clarence Mangan Is A Member Of