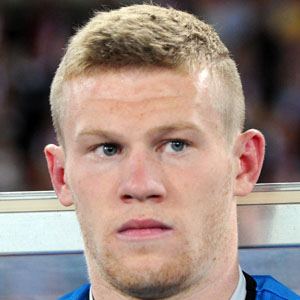 Winger who joined Wigan Athletic in 2013 after spending two years with Sunderland. He became a member of the Republic of Ireland national team in 2012.

He began playing with Institute, still on amateur forms, in 2007, and upon his release joined Derry City, playing in the League of Ireland Cup matches.

In 2013 he got in trouble over a tweet in which he named an Irish rebel song as his favorite - which did not still well with Sunderland fans.

He was born in Derry, Northern Ireland. He married Erin Connor in 2016. They have three children together.

Kevin Phillips was also a prominent Sunderland footballer, and one of the Premier League's top scorers in the early 2000s.

James McClean Is A Member Of