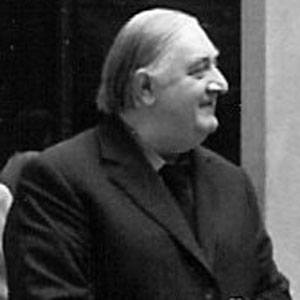 Known for his work at universities such as Oxford, Cambridge, and Harvard. Considered to be one of the greatest architects of the latter 20th century and was known for drawing from all of architectural history, whether it was ancient Rome or the Baroque era, for his work.

He fought in World War II before studying architecture at the University of Liverpool. He was first a member of the Black Watch, then the Parachute Regiment, which took him behind German enemy lines prior to D-Day. He and the famed Colin Rowe were classmates at Liverpool.

His name adorned the Stirling Prize for architecture after 1996.

He was born in Glasgow, although his birth year was disputed. He and the famed architect Colin St John Wilson were lifelong friends. His family enrolled him in Quarry Bank High School, Liverpool, England.

He was influenced by the work of Frank Lloyd Wright, despite refusing to blindly follow Modernism.

James Stirling Is A Member Of