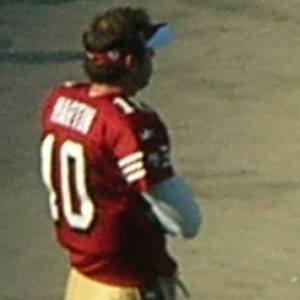 Journeyman quarterback who played for many NFL franchises from 1993 to 2008, mostly as a backup.

He played at Weber State University, where he was the Walter Payton Award winner in 1991.

He played for the Los Angeles/St Louis Rams in three different stints.

He was born in Orange, California.

His final NFL team was the San Francisco 49ers, who signed him after an injury to Alex Smith.

Jamie Martin Is A Member Of