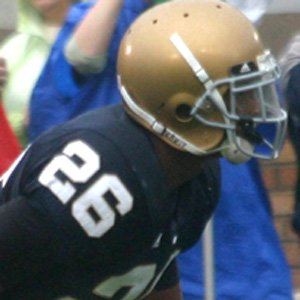 Notre Dame safety who was drafted in the sixth round by the Cleveland Browns in 2013. He played primarily on the team's practice squad during his rookie year.

He was ranked as one of the top 15 safety in the country with 56 tackles and 11 pass breakup his senior season at Tucker High School.

He had his best single-season performance with 45 tackles, two sacks and an interception in 2011.

He and his brother were raised in Stone Mountain, Georgia.

He was teammates with starting quarterback Everett Golson during the 2012 season at Notre Dame.

Jamoris Slaughter Is A Member Of