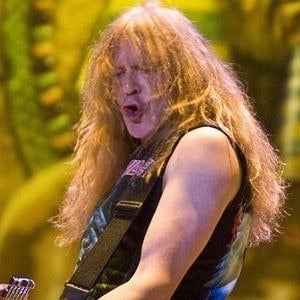 The third guitarist for Iron Maiden who has played with other bands, including Gillan.

He was the lead guitarist of White Spirit, which toured around in the mid-1970s, mostly doing covers of Led Zeppelin and Pink Floyd.

He is left-handed, although he plays the guitar with his right hand.

His wife's name is Sandra and they have two children, Sian and Dylan.

He joined Iron Maiden in place of Adrian Smith.

Janick Gers Is A Member Of