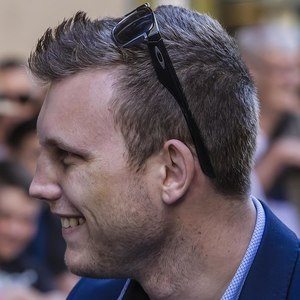 Australian boxer nicknamed "The Hornet" who is perhaps most famous for his July 2017 victory over Manny Pacquiao, which was widely considered a surprising upset in boxing circles. The victory earned him the WBO welterweight title.

He grew up in Brisbane, Queensland, Australia and began boxing as a means to defend himself from bullies. He earned a Bachelor of Education degree from Griffith University.

As an amateur fighter, he represented Australia at the 2012 Summer Olympics.

He married Joanna Horn in September 2014. He and Joanna welcomed a daughter named Isabelle in 2017.

In 2016, he defeated Ali Funeka with promoter Bob Arum in attendance.

Jeff Horn Is A Member Of