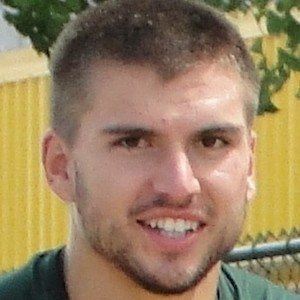 Wide receiver drafted by the Green Bay Packers in the 7th round of the 2014 NFL draft who made a name for himself in the 2016 NFC divisional playoff game against the Arizona Cardinals when he caught a Hail Mary pass from Aaron Rodgers to send the game to overtime.

He was a First-team AFCA Div. II All-American college player at Saginaw Valley State after playing both basketball and football in high school.

He was the first player drafted from Saginaw Valley State, and the first wide receiver, since 2005 when Todd Herremans was selected.

He was born in Tawas City, Michigan.

His role on the Packers increased during the 2015-2016 following a preseason, season ending injury to Packers standout wide receiver Jordy Nelson.

Jeff Janis Is A Member Of