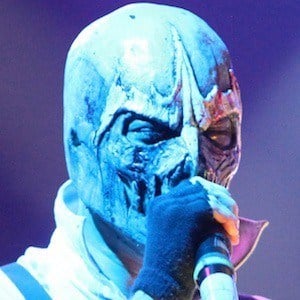 Vocalist and cofounder of the Ohio-born metal band Mushroomhead which has released upwards of half a dozen records since it's inception in 1993. He is often renowned for his varied face paint designs, most notably the persona of the butcher.

Before the formation of Mushroomhead, he fronted the band Purgatory in the 1980s.

Outside of Mushroomhead, he is a solo performer otherwise known as Jeff Hatrix signed to Suburban Noize Records.

He was born Jeffrey Lewis Hetrick in Cleveland, Ohio.

Slipknot singer Corey Taylor has denied a rivalry between Slipknot and Mushroomhead, and Jeffrey himself has stated the feud exists more between the fans than the bands themselves.

Jeffrey Nothing Is A Member Of