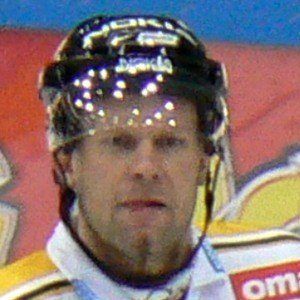 Finnish defenseman who was a three-time silver medalist at the World Championships. He played 149 games in the NHL and 121 games in the KHL, but spent the majority of his professional career in his native Finland.

He was drafted by the Los Angeles Kings during the 1993 NHL Entry Draft.

In 2008, he was charged with smuggling amphetamines into Finland.

He married Nanna Koivisto in 2015.

He was teammates with Teemu Selanne and Saku Koivu on the Finnish national team.

Jere Karalahti Is A Member Of