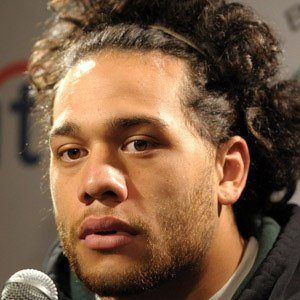 NFL quarterback who was signed by the San Francisco 49ers in 2011 as an undrafted free agent.

He attended the University of Oregon, but was suspended for a season after being suspected of theft.

He appeared on a regional cover of Sports Illustrated leading up to the 2009 college football season.

He was born in 1988 to parents Linda and Kennedy.

He and Dennis Dixon both played quarterback for Oregon.

Jeremiah Masoli Is A Member Of