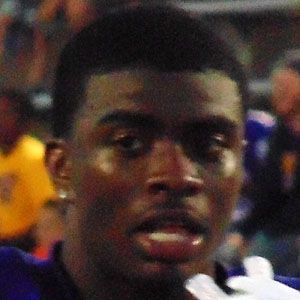 After playing his college football career with the Georgia Southern University Eagles, this running back was drafted in 2014 by the NFL's Minnesota Vikings team.

While a student at Sprayberry High School in Georgia, he was named Region 7's AAAA Football Player of the Year. During his high school years, he was also a track & field star.

During his college career, he scored over forty touchdowns and nearly 4,000 rushing yards.

He was born in Atlanta, Georgia, to Frances and Rungie McKinnon. His half-brother, Lester Norwood, played college football for the Florida Gators.

He and Indiana-born linebacker Anthony Barr were both drafted by the Minnesota Vikings in 2014.

Jerick McKinnon Is A Member Of