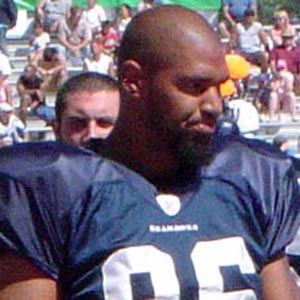 Former NFL tight end who played for the Seahawks and Buccaneers during his 8-year career.

He was a second-team All-Pac-10 selection during his sophomore season at the University of Washington.

He reached the Super Bowl with the Seattle Seahawks in 2005, but the Pittsburgh Steelers ended Seattle's playoff run with a 21-10 victory.

He was teammates with Matt Hasselbeck during the Seahawk's 2005 NFC Championship run.

Jerramy Stevens Is A Member Of