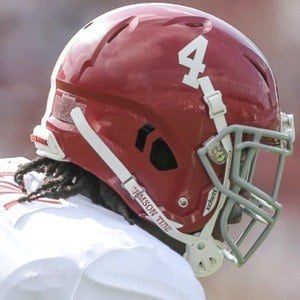 Wide receiver who received the Biletnikoff Award as the nation's top receiver during his sophomore year at the University of Alabama. He was selected 15th overall by the Denver Broncos in the 2020 NFL Draft.

He played football at Deerfield Beach High School in Florida.

He was born in Deerfield Beach, FL. His mom Marie immigrated from Haiti to the US when she was 14 years old. He is of Haitian descent. He has an older sister named Diane and an older brother named Terry. His younger sister Aaliyah passed away when she was only 7 years old due to a rare condition known as trisomy 18. He has a daughter named Journee.

He was teammates with running back Najee Harris at Alabama.

Jerry Jeudy Is A Member Of