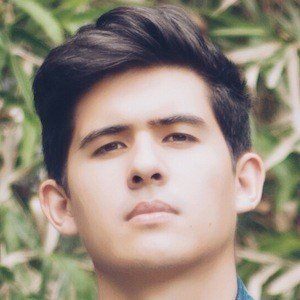 Filipino-American singer who teamed up with his twin brother Christian Perkins to perform as a duo called the Perkins Twins. They signed with Universal Records and released a debut single called "Ikaw Na" before putting out an EP titled Can't Stop.

He was an athlete growing up, playing on a travel basketball team and winning a Grand Prix Doubles tennis championship alongside Christian. He was a varsity player in high school for both sports.

He earned an academic scholarship to attend the University of California at Berkeley. He plays the guitar and ukulele. He has done some modeling, and he and Christian would start their own tennis academy in the Philippines called the Perkins Twins Tennis Academy.

He and Christian's parents are Tarny Perkins and Filipina mother Tess Pazziuagan. Tarny is from California and Tess is a former flight stewardess from Tuguegarao, Cagayan.

He and Christian have covered a number of songs which they published to YouTube, including the two Ed Sheeran songs "Thinking Out Loud" and "All of the Stars." Their influences include Justin Timberlake, the Beach Boys and Maroon 5.

Jesse Perkins Is A Member Of